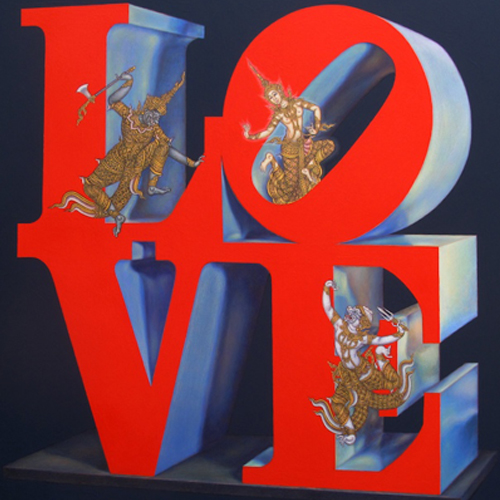 Introduction
Jirapat was born in 1971 in Samut Prakarn and completed a Master degree at Silapakorn University in 1999. Jirapat is one of Thailand’s leading artists whose works display interactions between Thai and Western culture.

Artist
Then the artist has become more political than ever; he reinterprets the story of Nonthok of the Thai national epic Ramakien and brings such issues as class, integrity and abuse of power to the forefront. This makes the series not only relevant to the on-going political crisis in Thailand a few years ago but also universally elsewhere.

In his past series, his heroes are depicted in a distinctive Thai Setting and are often seen interacting with traditional Thai heroes and mythical figures, most of whom are characters in the Ramakien. Jirapat also takes on well-known icons spanning from oil master paintings to stars in the entertainment industry and American superheroes and puts them in a new, Thai context.

Jirapat has exhibited a many international art shows in Asia, America and Europe and displayed in a few museums. He is also the only Thai artist who is featured in the new Thames & Hudson book: 100 Painters of Tomorrow.