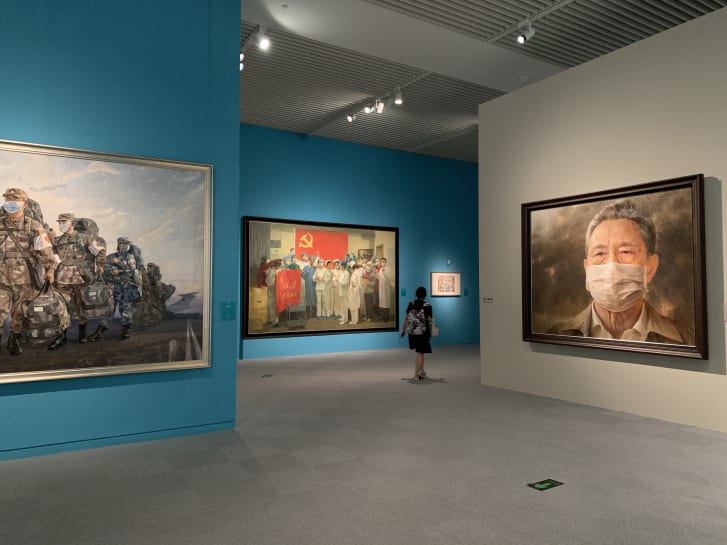 The world may be in the midst of a global pandemic, but visitors to a new Beijing exhibition among be forgiven for thinking the battle has already been won.

A triumphant art show celebrating the "great spirit of the Chinese people" in fighting Covid-19 opened this month at the country's National Museum, near Tiananmen Square in the center of Beijing.

Through a collection of almost180 artworks, including sculptures, watercolors and dramatic oil paintings of heroic doctors, the exhibition aims to document the initial coronavirus outbreak in Wuhan and its aftermath.

But given that the country heavily censors art, the contents of the museum's exhibition mirrors the official stance on China's containment of Covid-19 through images of aid workers, the exhibition's messaging also appears closely aligned with government narratives around the country's international response to the crisis.

Once inside the exhibition, titled "Unity is Strength," visitors are led through three sections:The work of established visual artists, followed by works of calligraphy and contributions from amateur artists from around the country.

Take the large-scale triptych byPang Maokun, the head of a major arts institute, that shows a medical worker in various states of exhaustion. Or an oil painting depicting jubilant doctors and nurses in front of a large Chinese flag, evoking the style of Socialist Realism popular among revolutionary painters in the decades following the CommunistParty's rise to power in 1949.

Images of the late whisleblower Lin Wenliang whose attempt to alert fellow doctors to the initial outbreak was silenced by authorities, are an unsurprising omission, however.

TheNational Museum of China is not the only cultural institution in China to hostpandemic-themed exhibitions, though others have approached the topic in somewhat less self-congratulatory ways. Shanghai West Bund Museum recently brought together work created by 9 contemporary artists during lockdown and its aftermath, while the city's Science and Technology Museum considers the history of humans' fight against pandemics in a new show