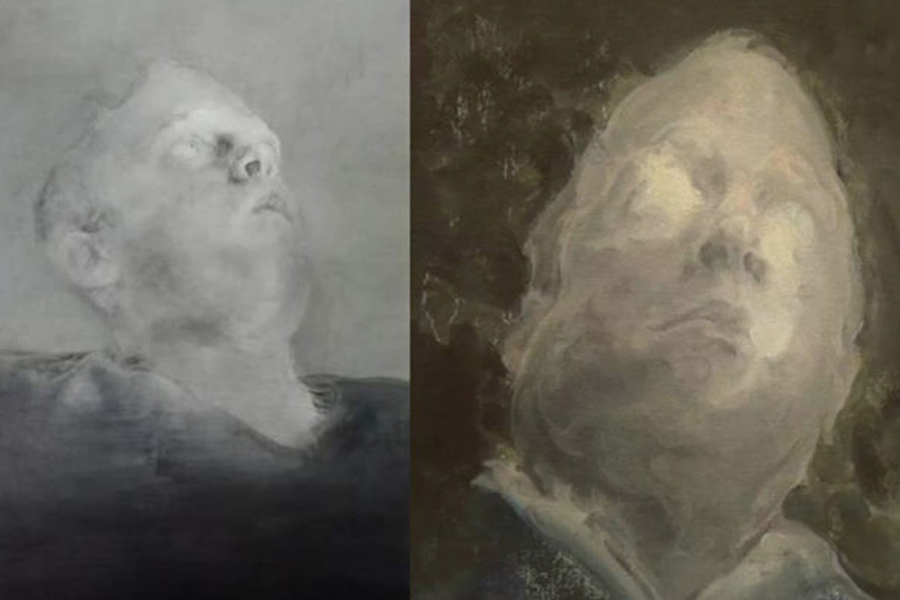 Thomas an exchange student from Luxembourg came to Nanjing, as Mao Yan did to learn Chinese. Arriving in the late 90’s, who knows what he expected, but certainly not to becoming a muse of one of China’s most prominent contemporary painters, Mao Yan.

Mao (born 1968) a figure painter, who lives and works in Nanjing, first moved to the city in 1991 to take up a teaching post at the Nanjing University of the Arts after graduating from the Central Academy of fine Arts in Beijing. He is known for his ethereal portraits in which figures emerge from shadowy indistinct backgrounds. Using oil paints in mainly muted greys and blues, his portraits flow between realism and abstraction and already sought after by collectors and fetch high prices at auctions today.

Mao first painted Thomas in1998 and would go on to make over hundred portraits of him in a series that has come to define the artist’s oeuvre. That he chose to paint Thomas, and other non-Chinese subjects, set him apart from his 90’s contemporaries and the prevailing movements of Cynical realism and Political Pop, which were preoccupied with overtly Chinese iconography.

As the series develops, the image of Thomas becomes increasingly distant and the focus shifts towards surface, tone, light and flesh. Mao does not paint figures of his imagination, they are all real people, but he strips them bare of their context and endows them with certain peculiarities. Each figure has a strong sense or presence, communicated by the artist through accentuated features and facial expressions that lend each portrait a certain importance, drawing both the subject and Mao himself, out of the shadows.